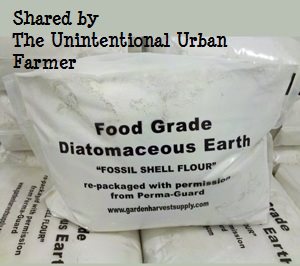 So I ran across this information today from the Unintentional Urban Farmer and just had to share it.  We have used Diatomaceous Earth (DE) for over the past 10 plus but I see, after reading this, I am not using it enough!  Hope you too find some new ideas to apply to your farm for great and healthy living after reading this!


Diatomaceous Earth is marvelous and I wouldn't be without it in my poultry supplies. It has many uses for my birds but also other animals and bug control around the home. It consists of micro skeletons of fossilized remains of deceased diatoms, which are a type of algae found in both sea water and fresh water.

Diatomaceous Earth has a wide variety of uses such as in filtration (drinking water filters, fish tanks and swimming pools), abrasives (it is in some toothpastes and facial scrubs), as an absorbent for liquids (like cat litter), and it is used in dynamite to make it more stable. Food grade diatomaceous earth is particularly useful to reduce internal and external parasites (such as Worms, Lice and Mites) in animals, including poultry.

The powder absorbs lipids from the waxy outer layer of mites and lice, which causes them to dehydrate and then die. For internal parasites, the abrasive microscopically sharp edges will kill many of the worms with regular use (it must be used daily for it to be effective) although remember there are also larvae in the bloodstream that won't be killed by diatomaceous earth. It is for this reason, I personally believe using a chemical wormer two or three times per year to make sure.

Always remember to wear a dust mask when using dusting powders to avoid inhalation. Good poultry suppliers will sell food grade diatomaceous earth in tubs that can be used in the following ways as an organic approach to parasite control. Do not be tempted to buy industrial diatomaceous earth that is intended for other applications as it will have a different composition and may be dangerous to your health or that of your birds.

1. Removing lice and mites. Diatomaceous earth can be dusted between the feathers and onto the skin regularly. It can be added to dust baths which is particularly useful. Since it is a natural/organic product, it can be used on your chickens. Many other products and louse powders state that they are for use in nest boxes and on bedding, not on your birds. This is because they are not licensed for use on chickens which produce eggs for human consumption.

2. Added to poultry feed - daily use of diatom as a feed additive may result in fewer worms, less mortality and better feathering. There are many different trace minerals contained in diatomaceous earth that are beneficial to poultry. The dose that is commonly used in most animals from poultry to cats, dogs and even cattle is between 2 and 5% (follow the manufacturers recommendations) added to their feed.

3. Other uses - it has a huge variety of other uses from water filtration to cat litter and it is often mixed with grains during storage to prevent mites getting into it and to keep it dry. The other main use I have for it around the home is for an organic approach to flea control on our pets.

Diatomaceous Earth is particularly useful if you keep poultry and is well worth having to help in the battle against worms, red mite and lice.

Thanks for stopping by. You will find this site full of pieces of me. Things I love, enjoy, cherish, laugh about, cry at, savor and learn from. There may be many songs posted here that lead me to the presence of the Lord, poems that touch my soul and stories that inspire my heart. I will share recipes and craft ideas, healthy living helps and really anything that I have found to be worth sharing. ENJOY!

My Reviews on YELP

Learn more about us debt.

Watchman on the wall...